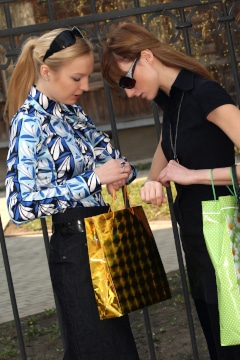 Throughout history, women’s watches designs, trends, and marketing strategies have continued to evolve as women progressed. When you shop for women’s watches, you have a variety of styles and choices to choose from, even men’s watches. The womens watch sizes today are yesterday’s men’s watch sizes. Some think wearing a masculine watch makes a statement similar to when woman began wearing shoulder pads in the 1980s. Women’s views on watches sizes have fluctuated continuously. The idea of the wristwatch goes back to the creation of the very earliest timepieces created in England.

Robert Dudley gave Elizabeth I of England a wrist watch in 1571 that was characterized as an arm watch. However, the definition of a wrist watch is a small timepiece intended to be carried or worn by a person, so as to make the time immediately and conveniently available. From the start, wrist watches were viewed as watches for women, while men used pocket-watches up until the early 20th century. Choices of women watch options have expanded over time and will continue to develop in the future.

Some watches for women have a gemstone on the top and others, like women’s dress watches, have faceted gems on the face, bezel, or bracelet. Many womens watches are detailed with jewels to make them very elegant. Some are made entirely of faceted sapphire. Several department and fashion stores display a variety of popular and economical watches similar in quality to basic quartz watches, but have more captivating designs. All watches provide the time of day, displaying at a minimum the second, minute, and hour. The current date and day of the week are also shown on some designs.

The wristwatch was envisioned to be displayed on your wrist, held together by a band or other style of bangle. Women’s watches designed in bracelet styles are intended to be worn around the wrist. Elegant women watches may also be worn as necklaces that you can wear around her neck. Women’s watches are produced in so many styles and from so many diverse materials that you can essentially wear them as accessory pieces instead of a way to keep track of time.

Jemima Khan, an English journalist, heiress, and campaigner, reignited women’s love of men’s watches after sporting a Panerai present to her by English actor and film producer Hugh Grant in 2005. Since then, women have continued to choose, buy, and wear large, manly timepieces. Watch enthusiast may remember the Cartier Tortue, a modified version of a 1912 model, which only went up to 31mm despite having an automatic movement. Women are beginning to shift their preference in watch size.

In recent months, there has been a shift away from the oversized wrist watch. More women are willing to wear dials near 40-plus millimeters as compared to 30 millimeters and smaller. There was also the introduction of Baume & Mercier’s Promesse, which will be accessible in the United Kingdom in the coming weeks. This collection was the most recent in a continuous line of promotions that will make you take another look at what the undervalued brand Richemont is capable of manufacturing.

In 2013, luxury Swiss watches had their worst year for sales growth for since the financial crisis. Today, like in several other industries, those monitoring the market are in search of the next big thing. China’s stand against corruption reduced exports to the country by 15 percent, resulting in a loss of an estimated $1 billion in sales for the industry. Subsequently, companies are shifting their focus to target women in 2014 and beyond to regain their losses and increase their influence. Watchmakers are having tough time marketing to women since female customers largely come from diverse backgrounds.

Approximately 35 percent of the sales in the watch industry come from women. The industry grosses about $50 billion annually. Many brands assume you want thin watches, because they are viewed to be ladylike and gentle. Consequently, this is the motivation behind why smaller women’s watches have quartz movements. It is factual that women’s watches have fewer mechanical options, but this is changing, specifically as a number of the major luxury watch brands increase their efforts to entice the female buying demographic.

Future of the Women’s Watch Market

Brands like Patek Philippe earn the majority of their revenue by selling quartz-movement equipped ladies watches with diamonds. The earnings on these timepieces are far more than mechanical ones. If the women’s watch market is viewed as deficient, the openness and suitability of a quartz movement will continue to exceed the mechanical movement, which means brands will continue to depend on the earnings from these higher margin products. Many of the luxury watch brands have mechanical movement-based women’s watches and more will come in the future if they are successful selling them.