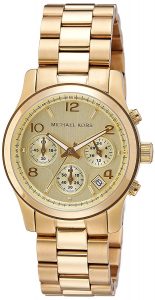 Wristwatches may be less common today than in the past, but that means that they can stand out even more as fashion accessories. Many women today, then, understand how a great-looking watch can be just the thing to complete an outfit.

Even as wristwatches are less-often seen as regular wear, then, some notable designers have been putting together their own takes on the classics. Michael Kors, for example, best known for the women’s sportswear he has been producing since the early 1980s, has drawn up a number of well-regarded watches over the course of his career.

One of the most popular of these models, for a number of reasons, has been Kors’s midsized, gold-toned, women’s chronograph offering, that is Michael Kors MK5055. With both case and band being constructed from sturdy, practical stainless steel, the watch can be found at very reasonable prices and will hold up to even active use with little trouble.

On the other hand, Kors’s design skills are very much in evidence throughout. Unfinished stainless steel might be appropriate for bulky men’s watches that are meant to give off an air of solidity, but rarely has what women are looking for from accessories. Kors addresses this here by specifying quality gold plating all over, ensuring that the watch will attractively complement a variety of outfits.

The watch’s sizing, too, makes it especially versatile. While many watches of chronograph design tend toward the larger end of the scaling spectrum, the tidiness of this one means that it will not look out of place even on a relatively delicate wrist.

At the same time, this watch has enough in the way of presence, thanks again, partly, to its gold plating, that it will not get lost in even relatively busy outfits, further improving the range of its usefulness. A conservative bracelet design, too, ensures that the watch will blend into a variety of settings.

While it will serve admirably to set off many outfits in the eyes of those who stand at a distance, then, the question still remains as to how Kors’s creation holds up to closer scrutiny. As the name says, this is not merely a simple wristwatch, but a chronograph, a very special type of timekeeping device.

Instead of simply displaying the current time with its conventional, analog hands, or even supplementing that reading with a numeric date indicator as it does, this watch goes well beyond. Three additional dials, in fact, are inset on its face, each of them bearing its own numbering, hash marks, and hand.

Far from being merely decorative, these extra gauges can be used for precise, detailed timing of events. One of the tiny, elegant dials displays the seconds elapsed since timing began, while the others keep track of the minutes and hours.

Detailed but Not Overdone

Compared to a basic wristwatch, then, the Michael Kors mk5055 is fairly complex-looking up close. Whether that extra detail and elaboration appeals to one in general or not, it is certainly striking, especially because watches of chronograph design are much less common in the world of women’s wear than they are among those designed for men.

The addition of these stopwatch capabilities has other implications for the watch’s cosmetic character. Instead of the single, central crown that is common to most wristwatches, this one carries three on the side, with the buttons above and below the main one being used to work the timing function.

Again, this extra bit of functionality makes the watch visually busier and more interesting than many alternatives, as well as more distinctive. Relatively versatile and flexible from afar, then, the watch reveals lots of character up close.

This Kors creation, then, is an appealing and interesting one in terms of looks. Even those for whom its actual timekeeping capabilities are an afterthought, though, will likely at least want to know how it fares in that department.

Fortunately, the answer is “very well.” Underneath all of the smart, skilled design work that went into crafting the watch’s looks lies a solid mechanical foundation that will ensure that the pretty piece can be relied upon with confidence when it comes to its basic function.

An analog quartz movement sourced from a leading manufacturer keeps rock-solid time, and smart case and seal design ensure that water will not be a problem under normal conditions. While the watch is not meant for diving, it can, in fact, be worn for casual swimming or in hard-driving rain with no worry about it breaking down or fogging up.

Just as it makes for a versatile, attractive fashion accessory, then, this Kors watch is also highly practical for whatever everyday purposes it might be put to. Overall, then, it is the kind of accessory that will make sense for just about anyone with an interest in such things to own.